I have made some changes to the way MergeUi works and also moved it into a new repository (https://github.com/GoEddie/SSDT-DevPack).

The way MergeUi used to work was that it enumerated the schemas and tables in a project and let you create a merge statement in the post-deploy script. The problem with that is that you may want to have different versions of the table for different environments or you may want to put the merge in a different script and either reference it using :r imports or not reference it at all.

The new way it works is that instead of enumerating tables it now enumerates script files (pre, post, included, not included etc) and lets you choose which table to add whether or not the table has been added before.

I hope this makes more sense, it certainly does for me. I have also fixed a few annoyances like the connection string to import data had to be entered in each time and also if you want to import multiple tables you needed to import them one at a time.

The use case is very narrow, it is for helping to write merge statements for deploying static or reference data using SSDT.

What should I be aware of?

If you notice there is no identity on role_id and the table only contains the id and the description table for looking up values and returning text to display. If you have defaults or identity columns or add in columns that are not related to the static data then you will need to write your merge statements by hand or use some other tool.

Things to be aware of

The add in does not hook into any of the visual studio events because this is a tool that shouldn't be used very often. You shouldn't very often have to change reference data, possibly when you create a project you should import the reference data tables and then modify them occasionally. Because it isn't used very much I didn't want to make Visual Studio any slower and so you will need to build your project and click the refresh button to pick up any changes.

To install this one, download the vsix from “https://github.com/GoEddie/SSDT-DevPack/tree/master/release” install that, open an ssdt project and go to “view->other windows->MergeUi” when it opens, if it isn't displaying a tree with your solution in click “Refresh”.

If the script has any merge statements in then these are displayed and you can edit these. There is no way to delete scripts using the ui and I try to be careful about not deleting anything that I shouldn't so if you edit the script before refreshing in MergeUi and then saving you may find multiple copies of the merge statement so just delete manually and then refresh in MergeUi to pick up the changes.

I have moved over to this repo as I have a few other tools that I wanted to release and instead of having lots of vsix files to install I thought it would be easier to release one, this may have been a mistake but we'll see :)

If you need any help then feel free to ping me by email etc or I have created a gitter chat room for the project:

I have had some issues with other tools on machines with the ctp installed - if you get any issues and you have it installed let me know but the chances are there will be issues!

It still isn't beautiful but it is functional: 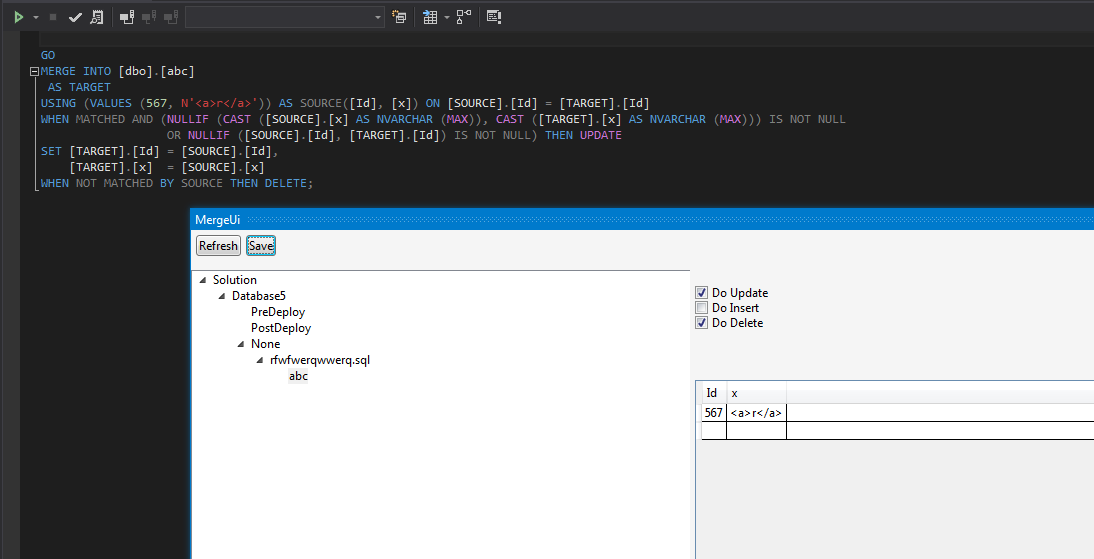 Aren't MERGE statements to be avoided?

We don't use a lot of merges, but something like this definitely makes them easier to use. I've found them helpful for populating/updating the base tables that make up our lookup values.

Thanks, I agree totally it is

Thanks, I agree totally it is the sort of thing when you set up a project and then every now and then, hopefully this makes life simpler!