So Visual Studio 2017 has been released a while and I had created a version of the test adapter (which lets you run tSQLt tests from within Visual Studio with SSDT, ReadyRoll or just plan sql scripts using the test window but I held off on pushing it to the marketplace as it didn't work with Visual Studio 2015.

I also fixed a couple of issues and one nice little problem with my .net tSQLt client where if you passed in the name of a non-existant schema or test, the tests would return success:

These now report a failure and handle extra select's in the output from tests. Because the test adapter uses the tSQLt client, that gets the benefit of any fixes I make there (isn't hosting individual repos on github awesome for even sharing your own work!)

If you want to use visual studio test window to run your tSQLt tests and have the aweomsness of this: 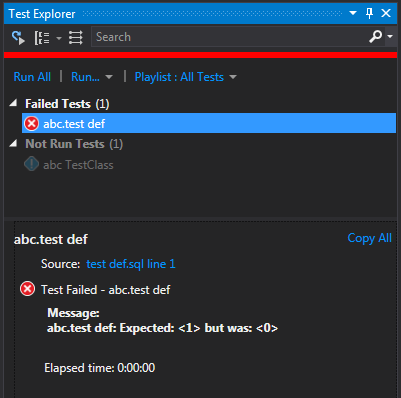 Then grab it from inside visual studio “Extensions and “Updates” on the tools menu.